What I’ve discovered about myself in the last year working with Marilyn is that I’m a fast athlete, but not necessarily a strong and durable one. I can move pretty fast (although I always need to get faster), but I break down and slow down pretty easily. Ironman racing requires you to be very strong and it requires you to sustain your speed for a very long time. The main overarching goal has been to build strength across all three sports, but especially in my swimming and running.

To address this issue with swimming, we decided that I just need to swim more. I’ve been swimming more weekly yardage than I ever have (I previously did roughly 15,000 yards or less a week, this year I’m swimming about 25,000-35,000 yards with some 40,000+ weeks). I’m also swimming with masters in addition to doing a lot of resistance work with tools like the band and drag suit. 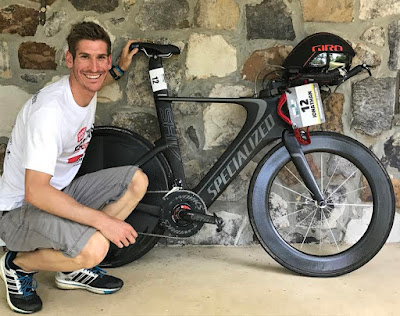 To address this issue with biking, I’ve been doing more overgears than I have before (peddling between 50-60rpm, sometimes for 4 hours straight). We actually reduced the overall biking volume since I seem to be able to hold my bike fitness for a long period of time.

To address the strength issue with running, I’ve been doing more long runs, more long bricks off the bike, more trail running, and more weekly volume (averaging roughly 35-40 miles a week compared to the 20 that I was averaging last year).

I also lifted more than I ever have this winter, but the strength training volume drops a bit as the endurance—and namely the run—volume increases. In triathlon, there is only so much you can work on at one time and you have to choose how to load to produce the best outcome. Thus, my strength training is periodized. It decreases in the competition phase of training. I do a set of core and light weight exercises 1-2 times per week, but it’s mainly to maintain the strength that I have.

There is always some risk involved as you increase training load or change what you’ve done in the past. We’ve built my training slowly and carefully, but sometimes the body breaks when pushing the limits. This time, my foot broke down about 4 weeks before the race. At this point, I did a 70 mile ride at IM race pace followed by a 17 mile hilly run at IM race pace. I felt tired, but not out of the ordinary. I followed this up with two days of active recovery and no running. On the second day, my foot felt a little tight but I didn’t think much of it. I had a short 3 mile run three days after the brick and a slightly longer run the day after that (about 8 miles with some intensity). After the 8 mile run, I felt some soreness in the top of my foot. It was enough that it warranted getting checked out. I rested it immediately and got it checked by my first go-to for any injury, Dr. AJ. AJ said he didn’t think it was a stress fracture, but noticed that a tendon near the cuboid bone was “pretty jacked up.” I rested it for another week and the pain came and went for what seemed to be no apparent reason.

All the while, I did some pool running to keep in the best neuromuscular shape that I could. When the issue didn’t seem to get any better, I decided to see a podiatrist, Dr. Jeff Delott, to get an x-ray just to make sure I wasn’t harming myself with more running. The x-ray confirmed that I did not have a fracture and that I could continue to use pain as my guide as the race approached. I continued to alternate running on the road with pool running going into the race. I took one full week off of running, ran 10 miles broken up over the next week, ran 16 miles broken up over the following week, and ran 4 miles the week of the race. Almost all of this was at a low to moderate intensity which wasn’t optimal, but it was the best that I could do without risking further injury. 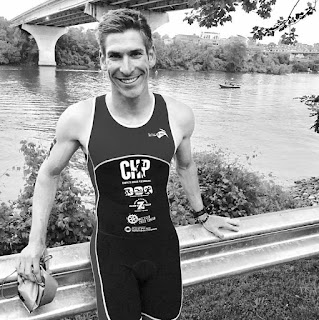 I went in with my best swim fitness ever. My goal was to race the swim as hard as I could unless I found myself in the front pack. If I swam with the front pack, I would sit in. If not, I would swim hard on my own no matter if I was pulling other athletes or not.

The race started off normally. I pushed hard at the beginning and got dropped by about 350 meters or so as we swam up river. Although getting dropped is never my goal, I was happy to see that I got further with the main group than I ever have before. I took that as a win and got to work pushing as hard as I could.

At the end of the swim, I knew there was one guy was behind me because he touched my foot occasionally as we went along. When I got out, I realized I ended up pulling the whole second group along with me (about 6 other guys) including Matt Russel who would eventually go on to win the race. I came out of the water a minute and thirty seconds behind the main group which is a personal best for me. Usually I come out with a 3 minute gap in a wet suit swim and a 3:30-4 minute gap in a non-wet suit swim. This shows that the increase in volume is helping. I know I worked hard because after the race, my shoulders and lats have never felt so sore.

I came out of the water with Russel and another athlete named Blake Becker. Russel and Becker ran slightly ahead of me into T1. I wasn’t 100% sure of running in bear feet, so I admittedly took the first part of the run on the conservative side. 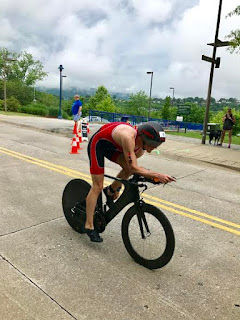 I had a fast transition and came out of T1 first. Russel came around me hard in the first mile. I lifted my pace to stay with him. At this point, I think there were 4-5 guys in the group plus a race official on a motor cycle. I was second. As I struggled with my shoe dials for a bit, Russel pushed forward and Becker came around me. I sat behind Becker and got myself together, getting my shoes adjusted. I looked down to see my power meter wasn’t working. After playing around with it for a minute or two without getting it to work, I just disregarded it and focused on the race.

We dropped 1-2 riders behind us and Becker kept in close contact with Russel for about 15-20 miles. At that point, Becker started to slow a bit and Russel pushed on. This was about the first time where I looked at my HR and saw it was about 155 or so. The effort felt about right, not too hard, but not easy either. With this information, I made a conscious decision to let Russel go and stick with Becker. It was down to three of us plus the official. Although the effort felt easier and easier (and based on my HR info where my HR drops throughout the entire ride, the effort actually was getting easier…HR 165+ out of T1 dropping to 150 towards T2), I decided to hang behind Becker. This was a tactical move that I committed to for the rest of the ride with the idea that I would conserve energy and have a better run. At about mile 50, 2-3 guys came around us, but I chose to stick to my plan.

With a little less than 2 miles from the finish, I went over a rail road track and got a flat in my front tubular. I decided to roll it in. Obviously, this slowed me down and I got gapped quickly. I did what I could to conserve time and ride into transition as safely as possible. As I got into transition, I was happy to see that the main group of runners weren’t too far up the road. I was about two minutes behind them. 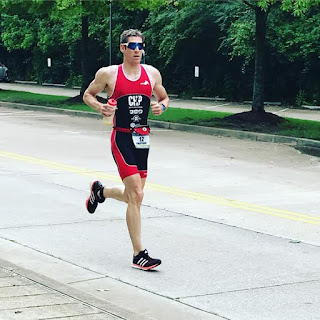 The run was a big question mark. I knew that I would be able to run, but I wasn’t sure if I lost speed or strength due to the premature lift of the running load a few weeks before the race. It turned out that I had a lot of strength, but not a whole lot of speed. I made sure the first mile wasn’t too fast and then ran by perceived effort for the rest of the race. I know I couldn’t have run much faster because my HR avg was roughly 179 with a max HR of 190 towards the end of the race. The heat wasn’t too awful in the high 70’s to low 80’s, but the humidity was very high which made for a tough run. 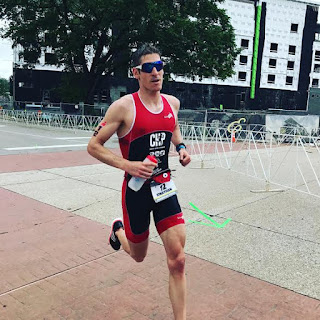 Overall, I was the 15th pro. Considering how I felt going in, I think this race was a descent reflection of my training. My swim was my best ever, my bike was solid, and my run was strong, but not fast. I chalk the slower run due to the humidity and lack of speed training in the final lead up. It’s also challenging to prepare for the heat of the south when I live in Connecticut (it was 50 degrees when I left), but I’m getting better at training for this. I am not discontent with how I raced, although I always want to be faster. I’m hoping I can carry this fitness over to my race in Raleigh on June 4th. Stay tuned for more updates!

A big thank you to the Rivers family for hosting Amber and I!

Interested in having your article published? Submit content to content@completehumanperformance.com and we will be respond within 24-48 hours!